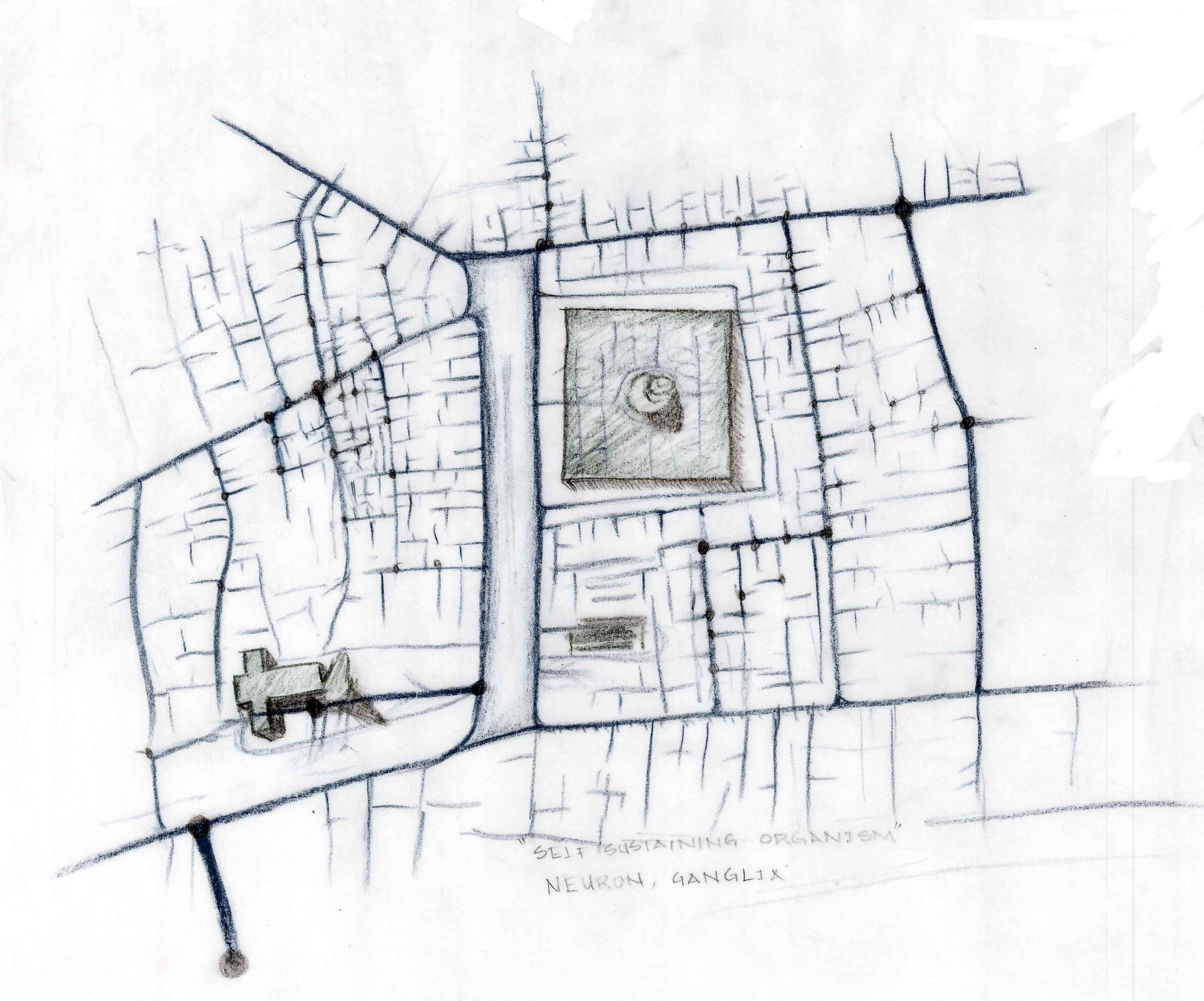 “Architecture is to be appreciated at the scale of the human, at eye-level, through the experience of the street.

Bengaluru robs us of this experience of architecture. One is always looking downward to dodge holes in the pavement, piles of fresh, steaming cow-dung and yelling at oncoming bikers who convert the sidewalk into a third lane.

Who cares about facades or skylines, when the pedestrian is completely absorbed by the chaos of the street?”

A professor in architecture school would often jokingly quote the above when describing the poor state of affairs in the practice of architecture in Bengaluru city. He lamented that residents rarely ever prioritized the hiring of architects; they claimed that a contractor would suffice. And yes, they got the job done, giving the city its signature look. The pastiche of loud, garish colors, shapes, and sizes that follows from this proud tradition of “cost-efficiency” in the practice of building construction is a story of chaos, born of chaos, expressed in chaos.

Why beautiful? Because the city is a unique model for resilience. Entire settlements are demolished, only to mushroom up at a more convenient site. Each resident is an architect, contractor, and mason in their own right. However, the political will to clear away squatter settlements is very strong and is backed by government funding. Replacement homes for squatters are often bleak, with minuscule spaces, double-loaded corridors, and little to no light or ventilation. These homes overlook residents’ aspirational identity, denying the opportunity for expansion, growth, and progress. These replacement homes negate the deeply human force compelling these settlements to crop up: the opportunity to congregate, engage with others, and form valuable social and business relationships.

Based on my interactions with residents, the ability to expand their homes and to form meaningful social relationships are the very lifeblood of Bengaluru’s organically-formed settlements. As a result, urban development seeks to wipe out squatter settlements with little to no success. Local planners and architects struggle to find solutions. However, the practice of relocation and provision of affordable housing is often fraught with far deeper issues.

Issues that I suspect have a lot to do with identity. Specifically, the process of identifying with place. It is impossible to simply extract people’s identity, their aspirational and communal needs, their cultural, religious, and ethnic identities, by trying to force-feed them a minuscule cookie-cutter home, devoid of character, a denial of the individual’s brimming personality.

Perhaps this is the reason why Architect Alejandro Aravena’s “half a house” scheme for low-cost housing in Iquique, Chile was such a success. With limited funds, the project took the risky step of providing only a skeleton and the essential spaces for living. Within the skeleton, the resident was granted the autonomy to develop space with individual touches and customized additions—space for the resident’s dreams to be realized, for expression of individual identity, while maintaining spaces for socialization.

Understanding identity in the way that it relates to “place” and “placemaking” is an exercise in complexity, one that often requires us to delve deep into our own psychological predispositions and question how they have been spatially programmed. Unfortunately, it is difficult to achieve an awareness of this programming while entrenched in our place of origin, our place of birth. The lack of additional points of reference robs us of the capacity to understand our spatial identity completely. What are the cornerstones used to construct this sense of identity within a place? One gets so accustomed to a unique set of sights and smells, the rhythm of language, the patterns of movement, that it is hard to imagine another way of life, of spatial production.

My own search for spatial identity began a year ago. I moved to New York City to pursue a master’s degree in urban planning after spending most of my adult life in Bengaluru, India. The trip from JFK to Morningside Heights was enough to snatch me violently from a carefully constructed sense of self. The suburban-style clustering of single-family homes and row houses in Queens shifted abruptly into the denser world of Long Island City. Sucked into the throbbing Queens midtown tunnel, I was lulled into a false sense of security by the rhythmic chugging of moving cars through her innards before we exploded into the wonders of midtown Manhattan: a never-ending sea of skyscrapers, all screaming for the eye’s attention. It was like nothing I had ever seen before, altogether mesmerizing. I knew I was experiencing something unique.

Such sudden transitions in character, unique to New York City, would cause no end in my wonderment as I explored, from Brooklyn to Little Italy, Chinatown to Times Square, SoHo to Battery Park. The city gave no warning before a cosmic change flooded my senses. And the people responded accordingly, never waiting, walking swiftly and purposefully in a throbbing symphony of moving bodies.

Eventually, I began to understand that my ingrained way of perception was so deeply Indian, Bangalorean in particular. I walked down the street as a Bangalorean would, with a slow and steady pace—slow enough that I would have the time to dodge potholes, to absorb and respond to the chaos around me. With a population of about nearly thirteen million, Bengaluru teaches the art of patience. There’s no point hurrying down the street when the aunties and uncles ahead of you take their own time waddling along; besides, it would be rude to push ahead. All you can do is make sure that your iPod is fully charged and your mind is occupied. Driving a car is no different: you must calm your mind while keeping pace with the inching traffic, especially if you drive a manual. A distance of ten kilometers takes an hour and fifteen minutes on an average day. Such conditions in Manhattan would be unthinkable, considering the distances that people commute for work. This reality has programmed me to hope for the best and prepare for the worst, training me to pack my bags obsessively and comprehensively to prepare for any version of the day that could possibly unfold. Like Indian school-children, I would lug these loads to work each day.

In Bengaluru, the majority of buildings in the city range between two and five stories, creating a dispersed horizontal landscape jam-packed with people. As a result, walking the street is an experience fraught with chaotic activity. The constant movement forces people to stay alert and present or risk literally falling through the cracks.

Walking through New York’s streets is another experience entirely. There is a sense of order and rhythm created by the flow of pedestrians guided by strategically placed traffic signals. As a pedestrian, I felt secure in the flow of people to freely explore the visual and sensory field. The smells of the food trucks and the panoramic street sights led my eye skyward where mammoth buildings competed for recognition. In a way, the orderliness of the street leaves the mind free to wander. The city street suggests that anything is possible and encourages one to dream big, to think in terms of the future. This is reflected in the architecture of the place, skyscrapers jutting boldly toward the cosmos, stimulating the imagination.

Such endeavors are only be possible with a great deal of political and economic security, collaboration, and planning institutions. Yet, this model of the supertall does not necessarily serve the logic of resilience or the community’s needs. This is when I began to think: maybe the two cities have a great deal to learn from one another.

In Bengaluru, everyone actively asks after everyone else and looks out for each other. Even with poor, unsheltered city dwellers, a sense of community thrives. The low-income housing development of Siddharthanagar, located behind one of the city’s most important goods markets, Madiwala, has mushroomed from nothing. The market and housing settlement support each other; many workers at the market live in this hidden settlement. The settlement also supports the high-income communities, Koramangala and Indira Nagar. Some settlement residents work as drivers, cooks, and nannies in these wealthier neighborhoods. What makes the settlement innately “Indian” is the strong sense of community. The streets in this neighborhood are usually no more than three meters wide and snake outward to connect residents with communal gathering spaces near temples, churches, and mosques. Despite the media’s portrayal of religious tensions, diverse communities often coexist in relative harmony.

New York’s five boroughs similarly offer dizzying diversity in cultural expression, religious belief, and nationality. This diversity defines the architecture and visual quality of the neighborhood and street. And yet, it is often difficult to find inviting communal spaces in Manhattan. Since skyscrapers offer high returns on investment—and city government is complicit in prioritizing economic growth serving transnational commercial purposes—large swaths of the street are often defined by imposing and uninviting glass and steel facades. To get zoning variances, developers sometimes add “publicly-owned private space” (POPS), but these spaces are awkward and seldom used. Cut off from the flow of sidewalk traffic, they are designed to appear visually continuous with the private development. Their formal, uninviting qualities do not encourage community use of the space.

Perhaps, in this tale of two cities, each with a strong sense of identity, each may offer lessons. New York could perhaps learn architectural techniques that foster communal gathering, and Bengaluru could learn to utilize existing technology to push the boundaries of architectural expression, in addition to putting a stop to the indiscriminate clearing of squatter settlements.

Through my own journey of ups and downs in the two cities, I found myself actively imbibing the essence of each.

However, I never stopped to think how much the essence of the place was redefined by the thoughts and actions of the millions of inhabitants just like me. Bangalore would not be the same without those loud garish buildings and those uncles and aunties waddling down the city streets. Perhaps New York would not be the same without people walking down the street in that swift purposeful manner, each a note, in the throbbing symphony of moving bodies.

And thus, as we each create our own identity, perhaps unknowingly we build one for the cities we live in.