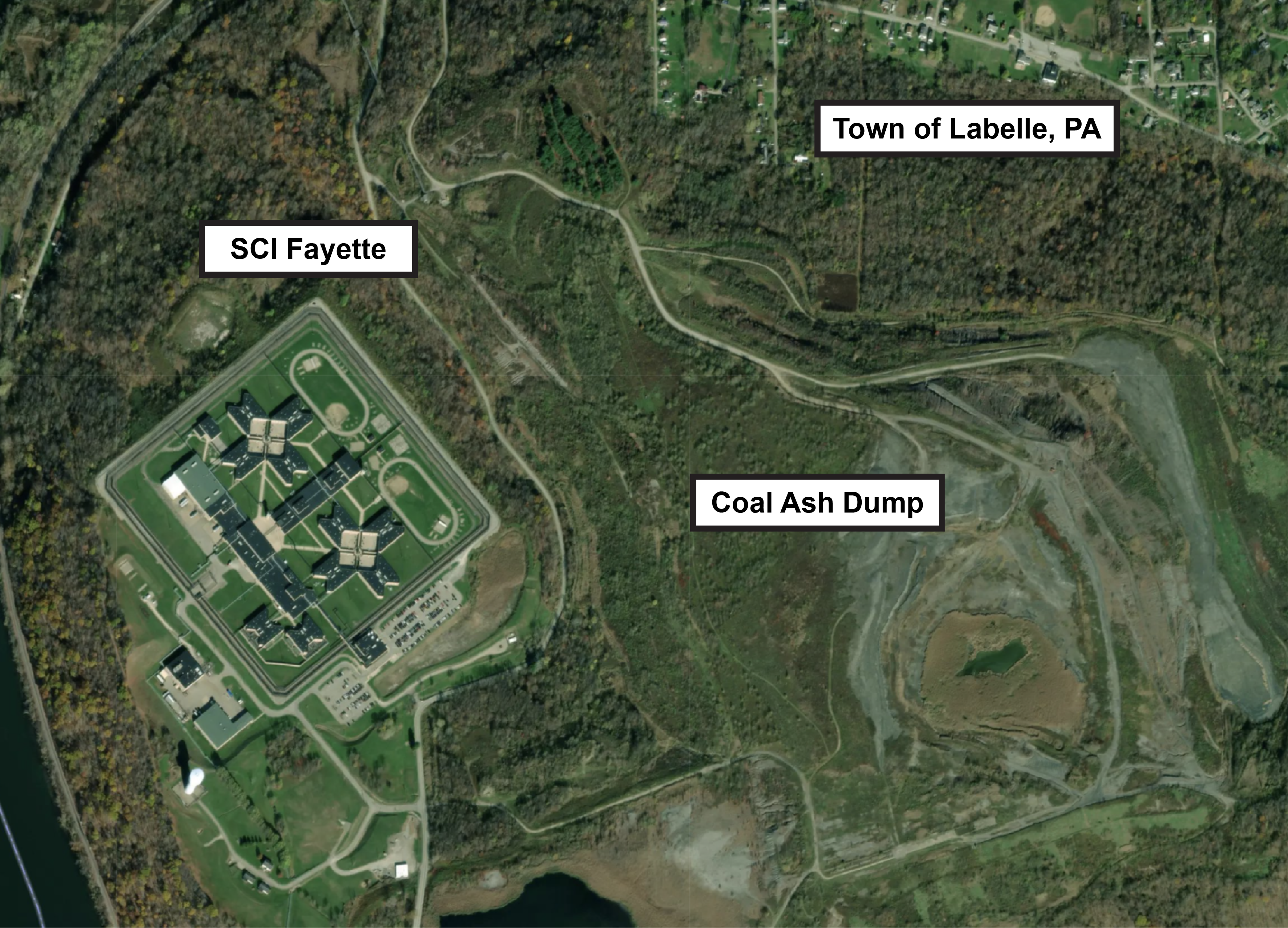 Since its heyday of the early-to-mid 20th century, Appalachia’s coal economy has all but evaporated. A combination of advances in coal extraction technologies, the fall of natural gas prices, and imperfect but efficiaous environmental regulations have led to a steep decline in coal-related employment and investment; remote towns solely built to support the industry are now home to the country’s highest levels of poverty. As the benefits of coal extraction near their limit, post-coal communities are in the midst of a mad dash to locate new capital markets.

In response, local leaders hail prison building as a “recession-proof economic engine” that can bring much-needed jobs, business, and federal funds to communities experiencing economic distress.  Policymakers cite overcrowding of nearby facilities, aging structures, and a “high need for mental health care, behavioral health treatment, and primary care” as justification for building a new prison. The development proposal is then packaged to communities as an economic stimulus; at the prospect of economic relief in the midst of population loss and high unemployment, community members often express support for the project.

Vera Institute (2019), Story and Schept (2018), Alder-Bell (2019) and many others have explicitly linked prison building to communities’ efforts to stimulate economic growth. In their 2016 study on the socio-economic effects of prison development, Perdue and Sanchagrin report,

“Rural [mining] communities felt the downturn of the 1980s especially hard, while the general economic restructuring toward the service and information sectors exacerbated the effects of the Reagan-era recessions … Facing such harsh realities, many local policymakers desperate for economic growth viewed prison construction as a lifeline, if not a panacea.”

Under the Surface Mining Control and Reclamation Act of 1977, coal companies should have been required to restore this abused land to its “approximate original contour,” but a loophole in the law allowed them to evade responsibility so long as the reclaimed land could be dedicated to an “equal or better use.” Instead of promising to piece mountains back together, mining companies breezed through the permit process by offering to create level plateaus ideal for industrial development.

Indeed, the retreat of the coal industry has left Central Appalachia with the unique coalescence of thousands of acres of vacated flat land in an otherwise undevelopable landscape alongside an immiserated workforce in desperate need of jobs. To local residents and politicians, the case for courting new prison contracts is as clear as day.

However, if the prospect of prison building as a tool for economic growth overrides a prison’s utility––(punitive) retribution, incapacitation, deterrence and rehabilitation––what are the potential effects to stakeholders on both sides of the bars?

As popularly identified by Ruth Wilson Gilmore in Golden Gulag, the prison has transformed into a tool with the foremost intent to deal with “surplus”—a surplus of land, of finance capital, and of workforce (namely African American men). In the wake of “deindustrialization and globalization of capital,” Story and Schept summarize that “large segments of the Black urban working class in particular have been rendered economically redundant. This surplus population, itself abandoned by capital and the state and residing often in disinvested urban neighborhoods, today makes up the greatest share of the nation’s prisoners.” Under this analysis, persons sentenced to incarceration increase in order to fill public and private facilities, not vice versa.

The attraction to prison economies must not be underestimated. Though, the Sentencing Project reports that national incarceration rates have steadily decreased—by about one percent per year—since their peak in 2009, not all states reported a decrease. In Central Appalachia, Tennessee’s prison population increased by 2 percent and Kentucky’s by as much as 9.7 percent since the U.S. peak of incarceration. At the same time, state expenditures on corrections have increased from $51.4 billion to $60.9 billion from 2010 to 2018. These statistics suggest there is a strong correlation between geography and incarceration despite nationwide trends. In the height of the prison building boom of the late 20th century, rural communities maintained the most apparent link: between 1980 and 1991, 213 prisons opened in nonmetro counties, and by 1994, 60 percent of all new prisons were located in rural areas.

In practice, prison building as a source of economic relief is not just nefarious, but a fallacy. Perdue and Sanchagrin reveal that in Central Appalachia counties where prisons were built had a smaller average income and higher percentage of poverty than in counties without prisons. While they did find that unemployment had slightly decreased in counties with prisons, others account that many prison jobs go to workers from outside the community.

Prison building also poses an amplified threat to human and ecological health. Correctional facilities, home to hundreds or thousands of inmates at a time, must be as seriously assessed as any other residential development when determining potential environmental effects to both residents and ecology. Yet recent trends in Appalachia’s prison projects suggest that environment-related concerns have gone ignored.

In the small town of Labelle, Pennsylvania sits State Correctional Institution (SCI) Fayette. Opened in 2003, the 237-acre, 2,030-inmate and 600–full-time-employee facility shares a tract of land with what experts call a “massive toxic-waste dump”: a coal ash processing plant whose purpose is to maintain a pond of coal sludge protected by a dam of coal ash and topsoil. Coal ash particles containing poisonous levels of arsenic, boron, cobalt, iron, manganese, and sulfate are “regularly seen blowing off the site or out of haul trucks and collecting on the houses of local residents as well as the prison grounds at SCI Fayette.”

In their twelve-month investigation into the facility’s environmental conditions, health of prisoners, and quality of treatment, the Abolitionist Law Center, Human Rights Council, and Center for Coalfield Justice found at SCI Fayette that

– More than 81% of responding prisoners (61/75) reported respiratory, throat, and sinus conditions, including shortness of breath, chronic coughing, sinus infections, lung infections, chronic obstructive pulmonary disease, extreme swelling of the throat, as well as sores, cysts, and tumors in the nose, mouth, and throat.

-12% (9/75) of prisoners reported either being diagnosed with a thyroid disorder at SCI Fayette, or having existing thyroid problems exacerbated after transfer to the prison.

These findings suggest nothing less than a full-blown health crisis. While the coalition acknowledges their investigation was unable to empirically attribute these ailments to coal ash exposure specifically, they are confident in claiming a correlation in that inmates reported “symptoms associated with exposure to airborne toxins,” such as respiratory problems, after they had moved to facility. Here, the sentiment that incarcerated individuals are categorically unable to leave the facility cannot be overemphasized; inasmuch as their exposure to the toxins is constant, their risk of exposure-related illness is multiplied by the length of their sentence.

These findings were duly cited in the Abolitionist Law Center’s complaints against the now-rescinded plans for a United States Penitentiary slated to be built on a former MTR site in Eastern Kentucky. If built, its irreversible ecological destruction would only compound the human health costs. The facility would have encompassed 570 acres of land and would have required “clearcutting over 120 acres of forest habitat for endangered bat species, excavating and grading an additional 59 acres, destroying three acres of wetlands … and emitting thousands of pounds of additional greenhouse gas emissions.”

In the coalfields of Appalachia, as well as the greater American imaginary, the extraction of scare resources and disposal of human liberties are one of the same in terms of their economic output. Building prisons atop toxic sites sits at the nexus of prison reform and abolition, and environmental and economic justice. In future fights against the practice, advocates must be intentional in not separating one issue from the next.

Chris Mai et al., “Broken Ground: Why America Keeps Building More Jails and What It Can Do Instead.”

Diana is a Master’s of City Planning candidate (’21) concentrating in Housing, Community, and Economic Development at the University of Pennsylvania’s Weitzman’s School of Design. She splits her time between Philadelphia and Brooklyn.