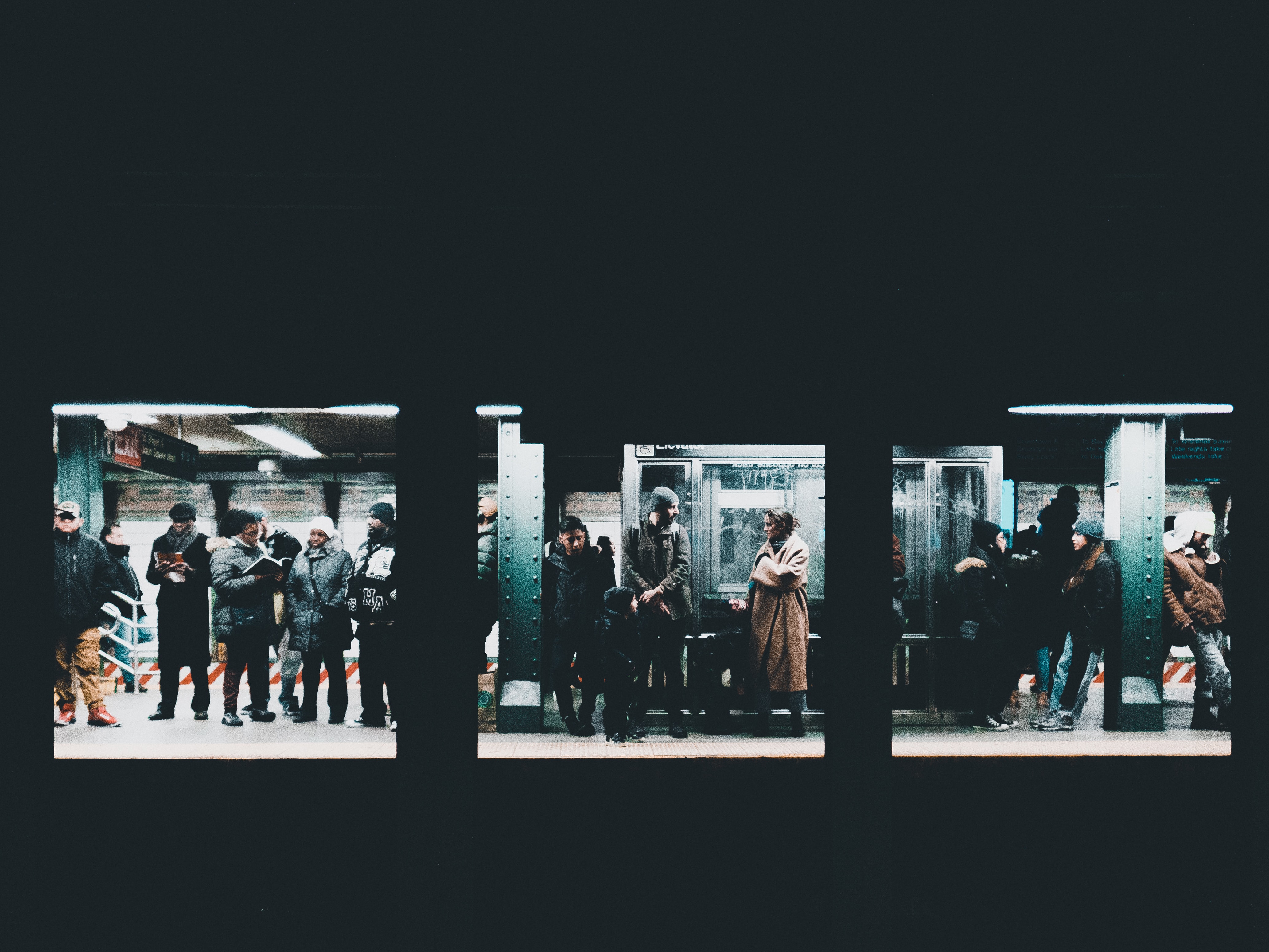 Strangers on the Subway

There are certain places in the New York subway system where the tunnels enlarge to accommodate two trains going in the same direction. As the trains traverse the tracks side-by-side, sometimes there’s an opportune moment where the two trains chug along at the exact same speed. Neither car appears to move; instead they float, frozen in space. It’s physics at work, but also real-life magic. As you look out the window at a passenger across the motionless void, you feel as if you are looking at another version of yourself in a parallel dimension. You know that person, and they know you. There is an invisible interdimensional thread that connects you. You both are ageless, raceless, genderless. Only your spirits are aboard the train. And together you are on this journey, sometimes struggling, sometimes thriving, just trying to understand life and your sense of self. But then, one train speeds up. The timeless moment collapses on itself, and once again you are fully fleshed and all alone.

I am fully fleshed and all alone.

My satin dress, black and stiff, had clasps all the way down the center, which made sitting on the plastic seats in the New York subway train uncomfortable. As I looked down into my lap, the bodice rippled in an unflattering way, and my swollen feet bulged over the edges of my black straps with the chunky heels. Luckily, a few rounds of drinks at the holiday party had made me numb to discomfort. My roommate seemed to be in a similar state, eyes half-closed and mouth agape, in the seat to my left.

We were fortunate that the party had been in midtown, so that we could take the 4 train straight to the Eastern Parkway stop in Brooklyn and only walk a few minutes in the biting December cold to our apartment in Prospect Heights. As we made our way south, the warmth of the train pleasantly embraced us, and my eyelids began to fold.

A young man hunkered down in the seat across from my roommate. I always found it curious that the seats are oriented so that you are forced to stare at complete strangers. Perhaps that was the point. But unless the opposite party is particularly attractive, most people find a way to tilt their gaze elsewhere. At this moment, my roommate and I had our respective gazes focused on the insides of our eyelids, when a deep voice caused us to abruptly perk up.

“You. Yeah, I’m talking to you,” the man said, slightly slurring his words. I could feel him scanning our holiday outfits with disgust.

He grumbled once more with eyes narrowed and chest puffed, “What are you doing here?”

Drunken hubris fortified him. He wanted us to engage. I took a deep breath in an effort to unravel the knot in my stomach. My roommate casually ignored the situation. He had grown up in New York.

“I’m talking to you,” the man repeated.

Feeling the increased tension, my roommate looked down at his shoes. I did too. We could see each other’s faces in his shiny leather loafers.

Suddenly, we both heard a gurgling noise. Moments later, a thick wad of spit splashed onto my roommate’s polished leather shoes. The man had gotten our attention.

“I’m talking to you,” he said defiantly. “You don’t belong here. Just because you have a black girlfriend doesn’t mean you belong. And besides, she’s only half-black.”

Just as I began to feel a quickening in my chest, the train began to decelerate. The man got off. The doors closed and the train continued. We rode silently to our stop.

My roommate, who is white and Jewish, grew up in Brooklyn. He knows all the neighborhood “haunts” and frequently bumps into friends on street corners. But this part of the city has a complex history, with layers that sometimes overlap and sometimes collide. Here was a collision borne from historic racial tension and oppression, a broken housing market, and the fear of neighborhood transformation.

I am Asian American. My mom is from Korea, and my dad is from Bangladesh, but I most strongly identify as a Southern California gal. I love the beach, and I say the word “totally” way too often. But because of my skin, I “kind of” belonged in this part of Brooklyn. A blurred perception of my identity inadvertently deescalated a hostile situation produced by our unjust world.

I moved from New York to Los Angeles a couple of years ago and, unlike most Angelenos, had the opportunity to take the metro to work. Every morning, I took the purple line from the Pershing Square stop to the Wilshire/Western stop. I rode almost the entire length of the brief route—the journey only takes ten minutes. Nevertheless, the line cuts through a diverse swath of the city. Men in suits file off the train with an air of importance at 7th St/Metro and Korean ajummas (middle-aged women) exit in droves at Wilshire/Normandie, the heart of Koreatown.

I love all subways. New York’s trains were my first, and I’ve been on many others. But I always felt most at home on the LA Metro. Though for the longest time, I wasn’t sure why.

Pros? I can usually get a seat. LA TAP cards are easier to tap than NY MetroCards are to swipe. More of the stations have escalators as opposed to the steep concrete New York stairs that I often feel will be a site for my next stumble. The stations in Los Angeles operate at a slower tempo, a less frenzied state than those in New York.

Cons? The upholstered seats absorb various scents and moisture. If I miss a train, I often need to wait thirteen minutes for the next one, an eternity in a subway station. I rarely hear any subway performers. Riders don’t follow basic transit etiquette, like moving to the right on an escalator if you plan to just stand, because LA is chill like that.

Despite its flaws, the subway has a life of its own, invisible to the millions of Angeleno drivers. In a car, you won’t witness the heroic act of a man pulling two guys fighting out of the tracks moments before a train arrives. You won’t grimace at the sight of another man vomiting a few feet away from you. You won’t exchange a small smile with the young woman who exhales as she slides onto the train seconds before the doors snap shut. A car shields you from all that reality, gritty and vibrant, the visceral interactions our sanitized world keeps trying to suppress.

And yet, these life-giving encounters still don’t explain why I felt so welcomed in the dark tunnels of this city.

I then consider an encounter that happened on a weekly, sometimes daily, basis. I’m on my phone, checking work emails and waiting for my train, when a woman approaches me. It’s a different woman each time, but she always is relieved to see me.

I respond with an awkward, slowly paced, “La línea roja a Wilshire/Vermont está aquí.” I finish with a hopeful grin.

“Muchas gracias,” she replies, resting an embracing hand on my shoulder.

Occasionally, the questions get too complicated. I can only shrug my shoulders and reply with a deflated, “No entie­ndo,” after which my illusion of kinship evaporates. I play back the scene in my head, looking up words on my phone that I don’t know, confused by my urge to keep a false sense of belonging last a few seconds longer.

Directly to my left, a lost Korean ajumma stares at a subway map.

The first time I took the subway in Korea, I was nineteen. I had finished my first year of college and was spending the summer with grandparents while doing some research at a local university. I often hear of people with ties to other countries making pilgrimages to their homelands, searching for something to inform their identity, something to help shape their sense of purpose and connection to others, to add texture to their understanding of their immediate family. On a superficial level, at least, I imagine those people often find comfort visiting a place where they look like others physically.

I, however, would never be taken for Korean. Latina perhaps but not Korean, despite the fact that Seoul, my mother’s hometown, feels deeply familiar to me. Everyone can pronounce my name. All the time. I never have to apologize for all the vowels. New acquaintances don’t avoid addressing me because of the fear of mispronunciation. Hair salons have expertise in cutting my kind of hair. I bought a pair of glasses that don’t slide off my nose.

But I’m too tan. My halmeoni (grandma) gifted me skin whitening cream. My eyes are too big. And due to a valid worry that others would single me out as a foreigner, my hal-abeoji (grandpa) accompanied me on my first day reporting to the university. I had assured him that I was more than capable of navigating the subway on my own, but he insisted.

As we were waiting for the train, my grandpa bumped into a man he knew, as one does on the subway. I couldn’t completely understand their conversation, but assumed he was introducing me.