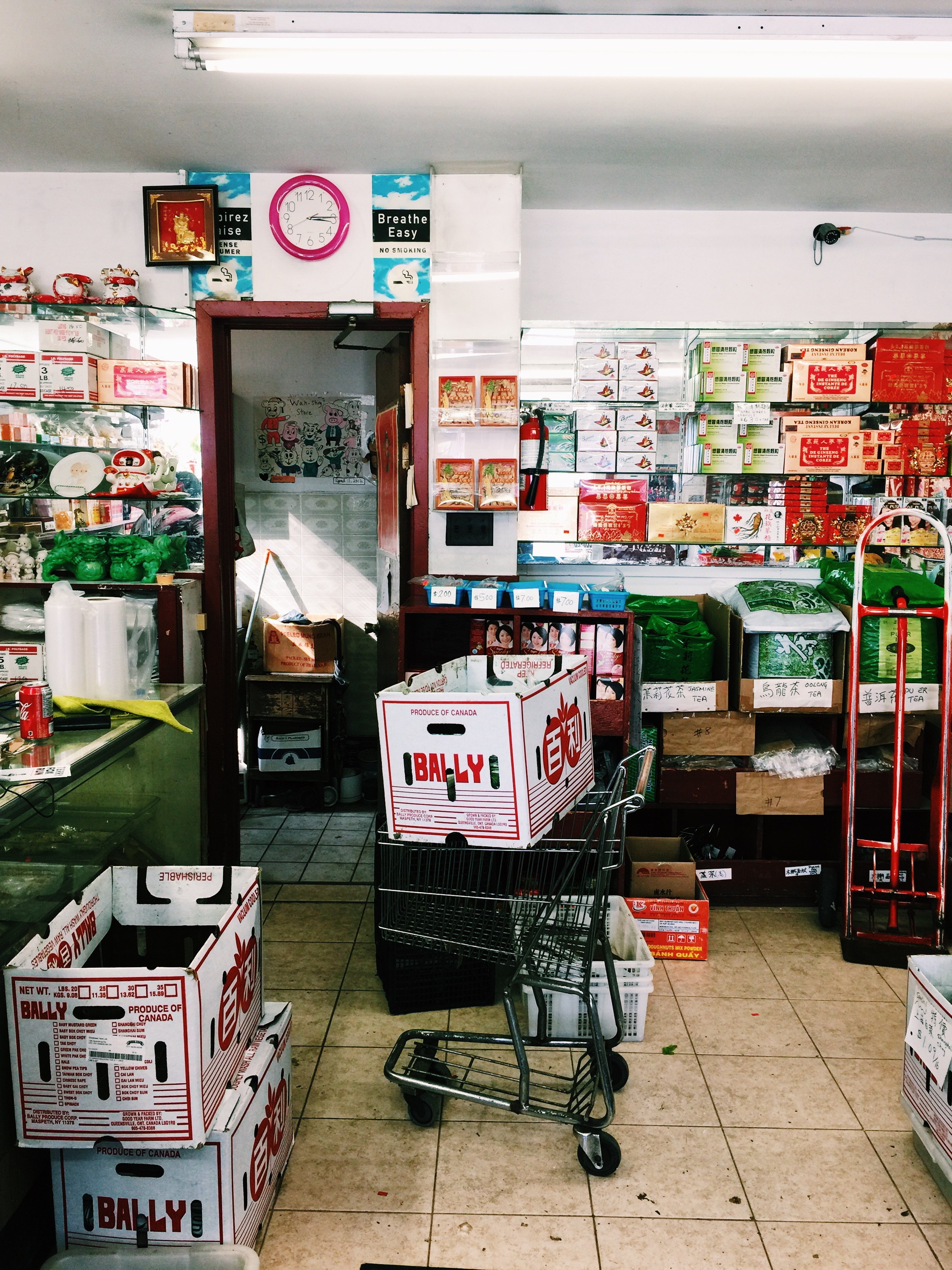 Finding Space (and Myself) in Chinatown

I am Chinese Canadian.

Even when I first wrote these words for an earlier iteration of this article back in October, they were meaningful. Now, with COVID-19 at our doorstep and the President of the United States adamant about labelling the virus in virulent, racist terms (“the Wuhan virus”), these words have weight.

For much of my young life, I hated being Chinese. I ignored that I was anything else besides Canadian. I’m a banana, I would proclaim loudly in class, I’m yellow on the outside and white on the inside. When classmates complained about my “stinky” lunches, I went home and begged my parents to stop making them. I cried so hard my first few weeks of Chinese school as a six-year-old that my parents had no choice but to take me out. We spent little time in Chinese spaces and I spent as much time as possible forgetting who I was, flattening the parts of me that I didn’t like until I was just Canadian.

In college, I took the unfortunately-named class Contemporary Canadian Problems and saw, for the first time, the social forces behind my family’s immigration laid bare. Casually, the professor presented a slide of immigration numbers from the 1990s through the 2000s, noting a clear jump in the 1990s when the Canadian government was hungry for technological labour at the height of the bubble.

We were sitting in the brutalist, windowless Math building at the University of Waterloo in the depth of a Canadian winter, but I felt a sudden heat in my body as my heart quickened. Before me was the story of my family’s immigration. It was economic policy and the pushing and pulling of intangible market forces that, in generations previous, had already dispossessed, displaced, and murdered the original inhabitants of the land, left vibrant communities cleared, and primed the land for capital accumulation

I accepted that I was Chinese Canadian, but I had no idea what it meant, only that I fit somewhere, someplace in this story. When I graduated and returned to Ottawa, I began the slow process of pulling apart the pieces of my identity. My friend and I co-founded a space for young Chinese Canadians while we both grappled with our identities and adulthood post-college. We posted our events, and people came, hungry for such a space. Our numbers swelled. We were drawn to Chinatown, where the majority of our events took place, and I grew increasingly intoxicated by the loudness of the urban design: the Chinese street signs, the Zodiac animals lining the sidewalks, how unabashedly Chinese the archway was at the head of the formal Chinatown boundary.

In Chinatown, I began to feel quietly powerful in ways inexplicable.

I couldn’t explain it to my parents, with whom I fought constantly about my community organizing. They couldn’t understand why I spent so much time there, why it was necessary to organize spaces for Chinese Canadians, why we felt any desire to do so. When my co-founder and I promoted our first event on an afternoon news talk show, I eagerly told my parents about the interview, only to have us enter a screaming match that lasted half an hour. You’re Canadian, they screeched. If you get too obsessed with Chinatown, you’ll become Chinese!

In that moment, I was stung by the reality that I wasn’t the only one who had to flatten my identity to survive. For my parents, my hunger for Chinatown, a hunger for my own identity, prompted a visceral fear in them. Asserting that we were more than just Canadian required admitting to ourselves that we were different—a profoundly difficult act when survival as an immigrant often meant blending in as much as possible, forgetting pain. It meant, for many, becoming the best minority or the best immigrants, emphasizing that we had succeeded by pushing ourselves as close as possible to whiteness and settler-colonial ideologies.

We were trapped in the logic of becoming the model minority, held as an aspirational standard to which other minorities must compare themselves. There are no winners in a system like this.

In these unprecedented moments of worldwide trauma, East Asians are experiencing an increase in acts of hate and many of my fellow Chinese Americans and Canadians are afraid. Our own perception of our identity as a model minority has been shattered, but, in reality, our understanding of ourselves has long been precarious.

In Los Angeles, where I am studying, the city’s original Chinatown formed after anti-Chinese sentiments led migrants to congregate in ethnic enclaves. In 1871, seventeen Chinese men in LA’s Chinatown were lynched by one enormous, violent mob, a brutal event now known as the Chinese Massacre. The original Chinatown, also home to other communities of color, was razed and residents displaced for the construction of Los Angeles’ Union Station. Even back in my hometown of Ottawa, many of the first Chinese residents in the early nineteenth century owned laundromats because those were the only businesses they were permitted to own, and they endured racist taxes that applied only to them.

But in spite of being marginalized, these Chinatowns became home for their residents and continue to be home for the vulnerable. Los Angeles’ Chinatown is a predominantly low income community, with a median income of just $38,786, compared to the $61,015 median income of Los Angeles County. The neighborhood is highly diverse: while the latest American Community Survey notes that 40% of the neighborhood is Asian, Latinx and Black residents make up 28.5% and 12.7% of the area, respectively. It is a vibrant community that has built networks of care, where people look after each other. But they are all being threatened by rapidly increasing rents, evictions, development, and gentrification.

Over the past few years, as my understanding of my identity and community change has deepened, much of the breathlessness that I once associated with the bright symbols of Chinatown gates and furnishings have slowly been replaced with horror. Many of these kitschy symbols from which I had once drawn power were tools used by Business Improvement Districts and Associations to make these neighborhoods presentable and business-friendly to encourage development and rapid neighborhood change that has displaced and gentrified members of the community. Chinatown is more than red lanterns and vibrant gates: it is a home to some of the most vulnerable. It is community.

A friend and fellow organizer in Vancouver once told me that Chinatown has always been a sanctuary neighborhood: its history is rooted in creating space for new migrants in the nineteenth century, separated from their families and facing racism and discrimination on systemic and individual levels.

As the shadow of COVID-19 approaches, my peers, friends, and colleagues have been organizing with intention and power across the continent. Mutual aid documents are being drafted for Chinatowns everywhere. Press conferences have been called to demand assistance for low-income residents and mom-and-pop business-owners who were suffering long before the virus hit Europe and North America. Tenants are being supported in their site fights and in city-wide campaigns for eviction moratoria. We come together not just for Asian Americans, but also for Latinx tenants, for seniors.

For so much of my life, I was dogged by internalized racism. I hated being Chinese—until I looked around me, into my communities and our collective histories, to remember that, while our histories are painful, they are also filled with powerful people, with community care, with fighting back. To me, being Chinese is to understand the pain of the past, and to find and contribute power to the scores of community organizers resisting the systems and forces working against us in 2020.

To me, being Chinese Canadian is a call to action, one that took me time to heed, but to which I am now fully responding.

Semuels, Alana. 2019. “The End of the American Chinatown.” The Atlantic. https://www.theatlantic.com/technology/archive/2019/02/americas-chinatowns-are-disappearing/581767/