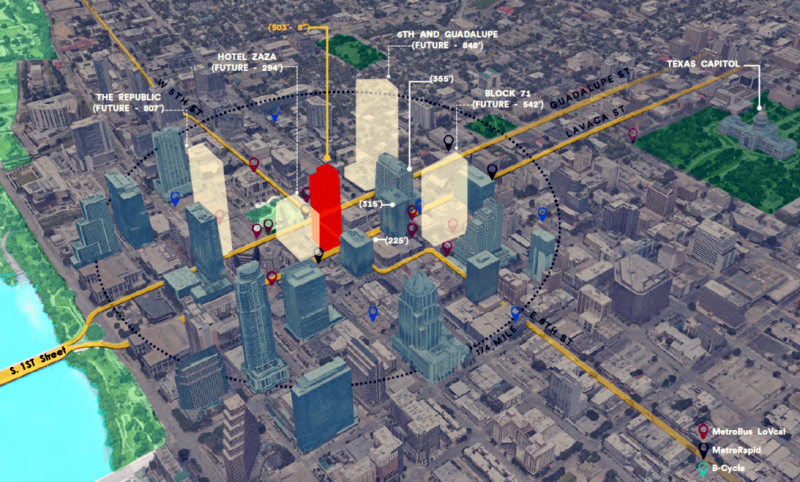 This urban study reviews how Austin City Council’s 1998 Smart Growth Initiative (SGI) valued eco-friendly building and the emergence of a rising tech economy over racial equality and economic diversity. Under a newly elected mayor who eased friction between Austin’s private developers and the environmentalist community, the city government created strict boundaries intended to encourage and restrict growth. This case study argues that while the city council may have reduced environmental damage with its adoption of development zoning, it also ushered an exodus of low-income minority families from Austin’s urban core. Had Austin’s City Council weighed the costs of human displacement over the benefits of sustainable building, the outcome of the SGI might have proved more successful. Further, this case study illustrates how purported smart growth and environmentalism movements became the anatomy of gentrification in Austin in the late 90s

Urban sprawl in Austin, TX is unmistakably on the rise. In 2016, the Austin metropolitan region was home to more than 2 million people. Austin is notorious for having Texas’s highest increase in the cost of living in the last decade. In the past five years alone, the median price per foot for real estate in the central city increased by nearly 77%. The spike in real estate prices began in earnest in the 90s after a massive downtown revitalization project attracted tech companies to Central and East Austin, both areas long-characterized by empty lots and abandoned homes. Since then, downtown Austin has become a tech metropolis. In under a decade, IBM, Dell, and Motorola redefined the economic infrastructure of Metro Austin, receiving generous tax subsidies and lenient zoning along the way. As unemployment fell and urban development rose, gentrification skyrocketed.

A common critique is that the city became excessively dependent on the technology sector success and refused to see its drawbacks. Environmental degradation, a weakened central city tax base, and massive human displacement became prominent downsides. Since the tech boom, Austin’s suburbs have become unprecedentedly segregated. From 1999 to 2006, the median price of a single-family home in East Austin rose 106 percent. Abetted by both the tech industry and by government policy, a steady rise in high-end residential and commercial development has prevented low-income families from finding affordable housing downtown.

Austin’s sprawling posture in the ’90s during the tech boom made city residents particularly tuned in to anti-sprawl coalitions. This hyperawareness heavily influenced the results of the 1997 Mayoral election. Kirk Watson, a liberal democratic who ran on promises to foster consensus between Austin’s developers and environmentalists, won the election by a small margin. “Austin’s government had been dominated for too long by win-lose, all-or-nothing politics, pitting the environment versus economic development,” Watson wrote in an op-ed in 1994. Within weeks of his inauguration, Watson formed the “Green Council.” This group brought together leaders of the developer community and the environmentalist community to discuss how to collectively cultivate a business partnership. The formation of the “Green Council” helped the two sides reconcile past tensions and served as a “high-water mark” for political participation by environmentalists in Austin. The “Green Council” indicated that the relationship between Austin’s business community and environmentalists had radically evolved.

Watson’s electoral success was widely attributed to his prior experience in the Texas Democratic Party. From 1994 to 1996, he served as the chairman of the Travis County Democratic Party, and in 1996 he became the vice-chairman of the Greater Austin Chamber of Commerce. Both of these positions were instructive to Watson as they reinforced his environmentalist stance and sprawl worldview. Through collaboration and considerate compromise, he and his City Council set out to enact a form-fitted smart growth plan for Austin. In the process, Watson capitalized on his esteemed record in city governance and his ties with the developer community to forge ahead with his environmentalist vision.

Austin’s City Council in 1997 was symbolic of a major victory against the developer community. Nearly the entirety of the City Council’s members were liberal environmentalist elites who were large donors for environmental advocacy organizations. Austin’s City Council was all-powerful in their ability to approve or reject zoning restrictions. Watson oversaw a City Council board of six elected officials that served as the highest authority on every major zoning debate that took place in the city. The structure of Austin’s city government relied heavily on the mayor and the city manager for legislative approval. While the mayor was technically the most important member of the City Council, he was not in possession of veto power. To be elected as a member of Austin’s City Council, a Texas state policy stipulated that a candidate to win with an at large majority. Generally, in the US, City Council members are elected by single-member districts.

With the council’s cooperation, Watson was prepared to continue the trend of environmental activism through his implementation of the SGI. The plan called for the redirection of development the city’s central business district and away from the Edwards Aquifer. Under Watson’s recommendation, the City Council released a detailed map that fundamentally split the city into three distinct development zones: the drinking-water protection zone (DWPZ), the desired-development zone (DDZ), and the urban desired-development zone (UDDZ).

From a bird’s eye view, the development zones appealed to both sides of the political spectrum. With the DDZ and UDDZ, the city enticed developers with financial incentives to build in an attractive East Austin region that was abundant in available real-estate and close to the downtown central business district. The incentives came in the form of bonds and were structured to encourage future development towards Austin’s urban core. At the same time, the incentives strictly discouraged growth in the surrounding region. In 1999, the City Council agreed to allocate more than $100 million towards financial incentives to attract tech companies, retailers, and high-density developers towards the DDZ and UDDZ in East Austin. Additionally, the city waived fees and rebated infrastructure costs to bolster their jurisdiction over future growth. The environmentalist community was largely satisfied with the SGI’s plans for the DWPZ. The initiative contained a clearly stated agenda that emphasized eco-friendly design and the sustained protection of Austin’s diverse natural ecosystem. Where financial incentives intrigued the developer community, the city’s commitment of $65 million towards ecosystem protection efforts gratified environmentalists.

An Economic Success, A Complicated Legacy

Watson and his environmentalist City Council were generally pleased with the SGI’s impact on responsible growth in the development zones. In their estimation, it successfully addressed the symptoms of sprawl it sought to mitigate. Just two years after the city passed the deal, the East Austin desired development zone became the nexus of new economic development in the central city. A throng of incentive-motivated real-estate deals was agreed upon, which replaced dozens of vacant lots with mixed-used development projects in East Austin. By 2000, the SGI helped create nearly 2,000 new jobs in Central and East Austin. Below the obvious physical improvements was an underlying impression that the development was tightly integrated into Austin’s urban fabric. Few questioned the scale of economic growth brought by the SGI. Encouraged by the immediate economic success of the initiative, Watson expanded the budget for the financial incentives in the DDZ and UDDZ.

Where the SGI succeeded in bringing economic growth to Austin, it failed miserably in fostering social inclusion and through the promotion of affordable housing. Since the SGI’s approval in 1997, Central and East Austin have become the Texas capitals of spatial segregation by race in the 21st century. The City Council’s SGI haphazardly accounted for the prospect of massive displacement of low-income Central and East Austin minorities. From 2000 to 2010, African Americans and Latinos were the only racial groups in Austin to see a decline in population. This legacy is remarkable given that post-SGI Austin was primarily characterized by tremendous economic prosperity and population increase. A 2014 study assessed the reason why so many African American and Latino East Austin residents vacated the area immediately after the SGI’s enactment. Of the more than 1,000 respondents, 56 percent remarked that they moved because of a general absence of affordable housing after the downtown revitalization efforts of 1997. A general pattern emerged from the study: minorities were disproportionately priced out while business growth boomed.

Sprawl as a Symptom of Poor Political Representation

Negligible minority representation on Austin’s City Council under the Watson administration sparks intrigue into the SGI’s disregard for social equality. With an increasingly prominent environmental movement in the city, the ’97 City Council largely reflected the white elite voice of Austin. Systematic electoral influences were at play when the all-white environmentalist City Council took shape. During the ’97 election, Austin was the biggest city in the US to elect members of its city council with “at large” electoral model, rather than based on single-member districts. At large election had been active in Austin since 1957 and tended to mute the unique perspectives and prerogatives of Austin’s diverse communities. This electoral policy directly impacted levels of voter participation and influenced electoral victories. At large voting seemed to stimulate insularity on the City Council in ’97. As a result, in their enactment of the SGI, Austin’s legislators were neither validated by nor representative of the low-income families of Central and East Austin.

The documented absence of diversity on Austin’s City Council is attributable to state actors, as well. Since the 1950s, the political ramifications of insularity among the City Council have led to policies that are racist in nature and unfair in execution. In the past 40 years, half of Austin’s City Council and 15 of 17 mayors have originated from four Metro Austin zip codes. These four zip codes comprise less than a tenth of the city’s total population, meaning the rest of the city has been left without political representation for decades. The ‘at large’ representation was a state-motivated structure that was adopted during the civil rights era. At its roots, it was a racist policy that deliberately sought to silence the African American voice in the political sphere.

Austin and the SGI shed light on the concept of eco-gentrification for sprawling cities in the US. Eco-gentrification identifies planning approaches that use green development as a driver for social reform in name, but ultimately facilitate financial benefit for the wealthy and deny access to vulnerable populations. Often, eco-gentrification produces more sprawl than it eliminates. This notion utterly satisfies and accurately portrays what occurred in Austin. In the decades since the passing of the SGI, an increasingly marginalized working class has sprouted in peripheral Austin. This cohort is heavily comprised of former East and Central Austin residents. Suburban Austin has become home to limited city services, long commute times, unbearable traffic congestion, and environmentally irresponsible building.

An underlying message is evidently clear from the SGI’s impact on East and Central Austin: solving tomorrow’s environmental problems requires holistic urban planning that is in equal parts focused on the environment as it is on financial equity. Evidently, environmentalist policies and the rhetoric that surrounds them, are most efficacious when they are joined by earnest attempts to understand a region’s social dynamics. The SGI’s perceived success in Austin is illustrative of this tense relationship.

Ethan Levin holds a BA in International Economic Relations and Political Science from the University of Michigan.