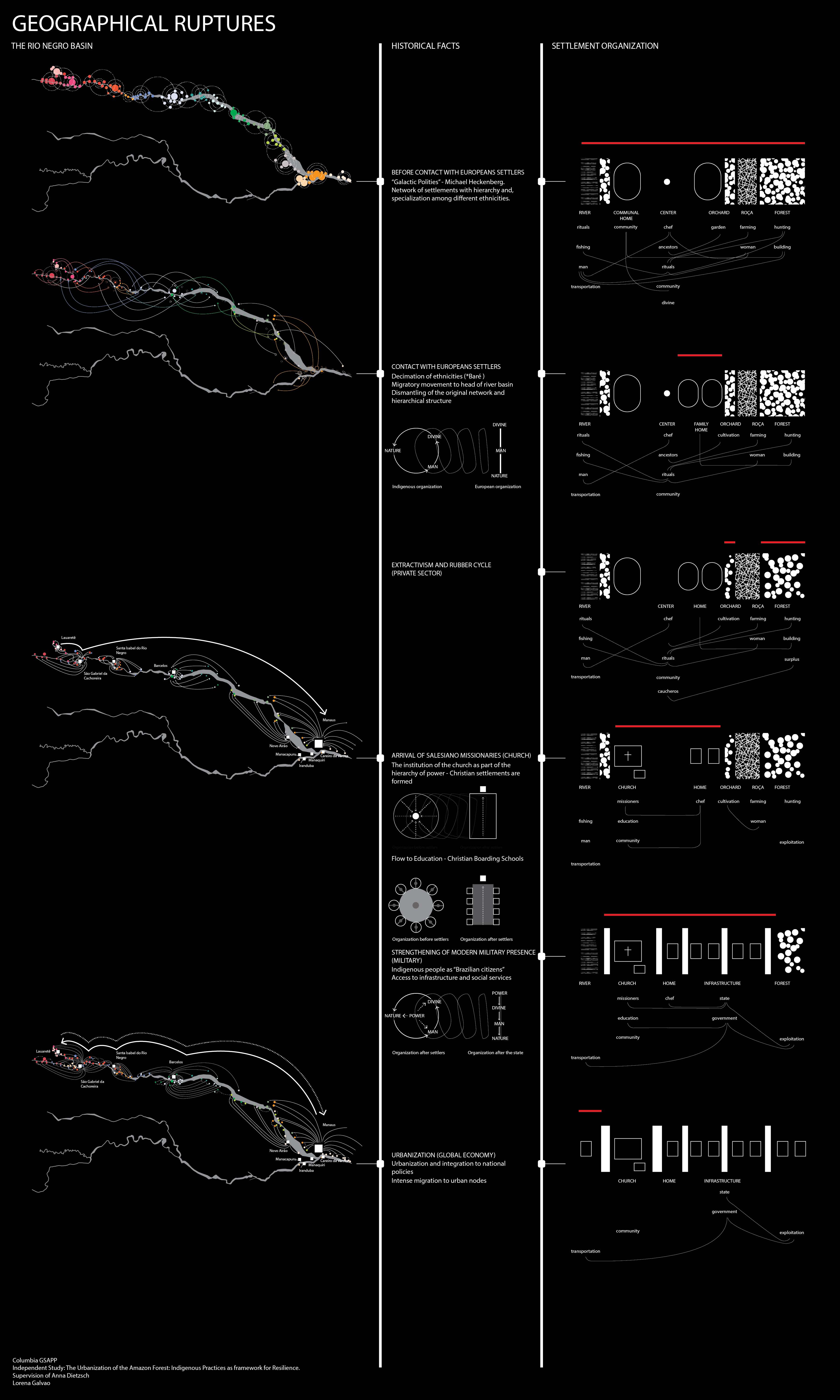 Urbanization in the Amazon Forest: Indigenous Practices as a Framework for Resilience

Representing close to 60% of the rainforest in the world, the Amazon is being deforested at a rate of 5.000 square kilometers² per year. In space of pristine forests are cattle ranches, mining and rapid urbanization, leaving the indigenous peoples of the Amazon as endangered as the forest itself. These graphics depict the shocks that disrupted the culture and identity of the indigenous people resulting in the current social-spatial condition of the urban settlements and their surroundings in the Rio Negro Basin.

According to anthropologist Michel Heckelberg³, the Amazon forest could have been home to approximately 30 million indigenous before the arrival of Portuguese colonizers. Hundreds of ethnicities lived in the Rio Negro basin interconnected by a network of relationships and exchanges with each other and the forest. A series of events, from the colonization to the institution of the republic to the commodification of the Amazon, caused waves of migrations up and down the Rio Negro Basin. Many ethnicities were drastically reduced, some like the Baré people, were even extinguished through series of epidemics and acts of violence.

The insertion of institutions of cohesion and assimilation (among them churches and schools) also played a role in changing the nature of the settlements, rearranging them from centered to axial (i.e. having the church as its main axis).  It deeply ruptured the cultural identity of the indigenous settlements, modifying their structures of power, religion and symbolism.

The commodification of the forest, alongside the loss of indigenous identity presents a serious concern for the future of the Amazon. It is essential to see that the real value of place here is in terms of the long durée of the forest, and the irreplaceable role that this ecosystem plays in maintaining the equilibrium of our planet. Evidence suggests preserving the indigenous settlements decreases rate of deforestation: in Brazil, deforestation within indigenous land is over 2.5 times smaller than in the rest of the Amazon forest⁴. Consider the Rio Negro’s legacy of disruption, these graphics suggest a future framework for resilient habitation that begins with recognizing and preserving the biocultural ecosystems of the Amazon.

Lorena Galvao is an MS in Architecture and Urban Design at the Columbia University Graduate School of Architecture, Planning and Preservation. Lorena completed this piece as part of an independent study under the supervision of Professor Anna Dietzsch.

Published in 2019 | Spring Edition and Power