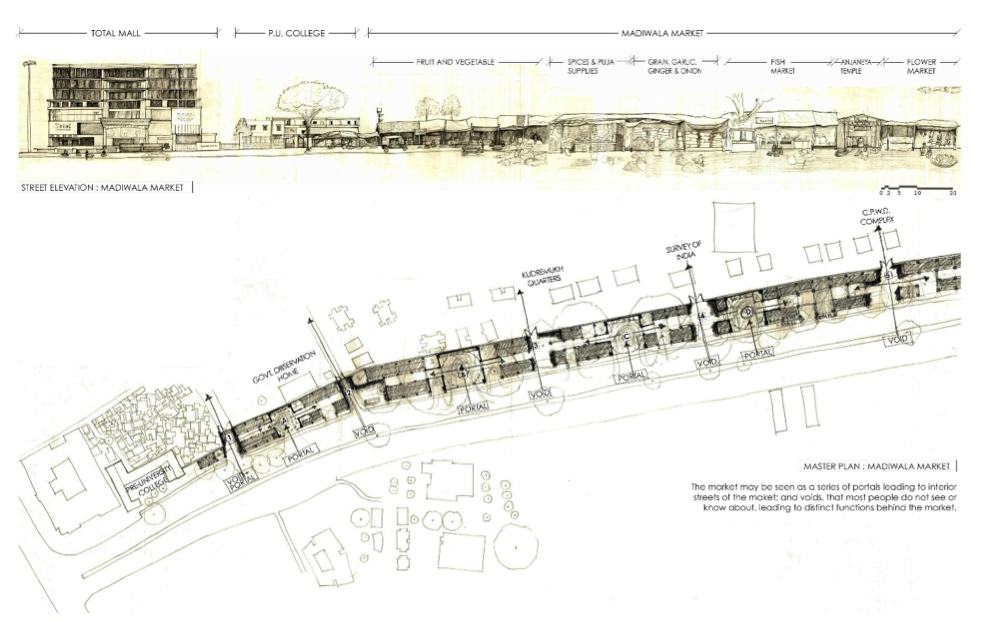 Set in the city of Bangalore, India, this essay describes the complexity of urban relationships, first through the lens of space, and then as they manifest between people. Much of what may seem like urban fantasy, is simply a way of life for many city dwellers. By narrating some of the more routine activities of a woman who works as a maid in the home of a city-dweller, I examine situations that may otherwise seem commonplace.

The piece is based on urban research towards an urban planning project I worked on in 2012. The neighborhood of Siddharthanagar is an informal settlement tucked away behind the market street, “Madiwala”, located in Koramangala, Bangalore. As of 2012, the six-acre tract of land, is home to over 900 families or approximately 4100 individuals, indicating that the floor area available to an individual is about 6 square meters.

About 10% of the households have access to a private restroom. The rest are serviced by 3 public bath-houses. There is no access to electricity. The residents are all engaged in some form of formal or informal employment, including students below the age of 16, about 80% of whom are enrolled at the neighborhood school. Many of the residents’ work as vendors and suppliers at Madiwala market, auto-rickshaw drivers, or small business owners. Others work as house-help in the surrounding high and middle-income neighborhoods in Koramangala, where they are employed as chauffeurs, nannies, maids or cooks.

The essay employs two local languages; Tamil and Hindi. The phrases used have been translated as closely as possible to their intended meaning. Switching between local tongues is very common in cities such as Bangalore, and it is important that the piece reflect the richness of the culture. I chose to include translations alongside the words, as to maintain the flow of the piece.

S locked her bright pink door with a heavy bronze padlock and thought of her mother two lanes down. A bright orange 12-inch wall abutted the bright pink door. These jhatang (gaudy) colors always put her off; every house in the neighborhood was a different color, all endlessly competing for the eye’s attention. She walked down the lane, accosted by many sounds and smells, all familiar and unique to Siddharthanagar. The mosque’s wailing call to prayer competed for attention with the brassy chanting and bells from the temple and the unifying yells of children in the schoolyard. She could smell the bhajjis (savory snacks) being fried a street down, juxtaposed with the acrid smell emanating from the public latrine.

Life was all about the unexpected here. The passageway was a mere meter and a half wide, barely enough for her to squeeze through with her cycle and enormous bag. A cow had managed to find her way into the wider main street as she exited the alley. When she finds the owner, Ravi, she would be sure to give him a piece of her mind. She cooed and prodded and patted the cow, who seemed to enjoy the attention, while refusing to acknowledge her presence. Finally, the cow moved a few inches; she could now walk by. Next, she was confronted by a black and yellow goods auto as she turned off onto the perpendicular street.

She tried to remind herself not to lose her composure; this was an everyday affair after all.

Luckily, the owner had been considerate enough to leave the hand-brake off. He had placed a rock in front of the rear wheels. So, she was able to roll the vehicle half a meter downslope, enough to move her cycle past it.

She turned down the main street outside Raman’s school, five meters wide, which could accommodate all the traffic moving through it. She saw her son throwing rocks at a dog in the playground, while ignoring the assembly bell that indicated the start of classes 15 minutes ago. Overwhelmed and upset, she walked up to him and asked what he was doing. He ran away, avoiding confrontation, and was soon inside the school building. She would have to deal with him this evening. It was time for her to get to work now, or else she would miss the milk-man, and Sa’ab (boss) would be insufferable without his morning coffee. The ride would take her 20 minutes with her new hero cycle. The commute was one of the few advantages of living in Siddharthanagar; the other advantage was that her mother basically lived next door. They both moved to this neighborhood three years ago; prior to this, the commute to work costed her an hour and a half each way.

The ride was the most exciting part of her day. She loved the multicolored chaos of the streets. She was often amazed at how these starkly different neighborhoods transitioned between each other in such a subtle manner. The running joke with her mother was that Kavalbairasandra was just like her, kali (dark-skinned) and wild. And Indiranagar was just like her twin Saritha, the Peeli Mem-Saheb (fair-skinned, posh lady). She always guffawed at her mother’s jokes, much to the latter’s dismay. Twenty-five minutes of pure excitement seemed to whizz past.

She snickered smugly as she thought to herself, her risk taking on the cycle would put Raman’s shenanigans to shame.

As she pulled into the compound, the milkman looked almost jaunty as he skipped out. He stopped to pick some gooseberries from the bush as he walked past her. Her bass-y “Aiiiyyy” seemed to impact him like a punch to the gut.

S: “abadiye yenne pathin poriya? Koncho kudo nikka vendam?” (Can’t you see that I got here? Why won’t you even wait for a few minutes?)

Milkman: “aiyooo medem, yenna ibdi kudo solringo?” (How can you talk like this, Madam?) He set aside her half liter of skimmed milk and 5 liters of full-fat as he complained. They exchanged a few of their customary quips, while she collected flowers off the trellis at the compound wall for tomorrow’s puja (prayers).

She was nervous about the big puja tomorrow. Sa’ab was always so finicky about everything being done exactly as he instructed. She had a feeling this would start with some early morning nitpicking about his coffee. As she walked into the kitchen, the phone was ringing. Usually she would take the time to adorn the tangerine wall with a floor-to-ceiling image of Ganesha (a Hindu deity), using her freshly picked jasmine flowers. She loved to admire the stately mansion as she walked through the heavy gothic-style door and into the elaborately ornamented foyer. She had no time for that today as she darted into the dining room and reached across the open breakfast counter to answer the phone.

Of course, it was her boss.

She walked up the larger-than-life spiral staircase, carrying the overloaded tray with steaming coffee, fruit, and pongal (a rice breakfast dish). She knew that Sa’ab was being extra demanding because he was hosting the puja, and because he had given her an advance. She was grateful, yet she couldn’t help but resent the awkward situation of her dependency. She yearned to have more financial freedom: to comfortably pay all the bills, Raman’s school fees and the rent.

As expected, Sa’ab was reading the newspaper with the 50-inch television playing Bollywood item songs on loop. She tried not to let the screen distract her as she handed him coffee and breakfast. He was already shooting her detailed instructions about preparations for tomorrow. “Now S, I want you to use the huge copper pathram (pot) to make the Prasadam (food offered during the prayer ceremony). Use only the homemade ghee. The food must all be prepared with only the silver puja spoons. When you are serving the food to the guests, you will have to lay washed banana leaves on the copper plates. And I hope you bought the Coorg honey and full-fat milk for the abhishegam (part of the ritual). In our day, we would always get milk fresh from our cows, but this will have to do now.”

She nodded a feeble assent and hurried downstairs to start her long day of work. She would have to manage both the cook, who was coming in to prepare lunch and dinner, and her own preparations for tomorrow. She was doing a little prayer of her own, to manage this task, and to avoid squabbling with the cantankerous cook. Oh! And to be back home in time to catch that rascal Raman, before he sped off with his friends. She toiled over the outdoor stove that Sa’ab had taught her to construct with firewood. This was another requirement of the Prasadam (food offered during the ceremony) making process. The work seemed to have become second nature to her, and she finished all her assigned cooking by 12:30pm. She was just in time to set the table for Sa’ab and call him downstairs for lunch. He seemed to be in a rollicking mood and mentioned that his work had been going very well, and that he wanted to talk with her after lunch.

He sipped his afternoon chai in the mezzanine living room, and said that he was very pleased with her, and that the prasadam was prepared perfectly. She had been meticulous about following his instructions and it showed.

“S, I want you, Raman and your mother, to move here with me permanently. I’ve renovated the outhouse that used to be a cowshed, to make a two-bedroom studio. It’s very spacious, and you will no longer have to worry about the commute.”

She took the broad boulevard back home, this time she was acutely aware of how the streets shifted. From wide, tree-lined avenues; to the meandering, wildly graffitied streets that were so familiar to her. She dodged the potholes like it was second nature, this time the dogs and cows seemed so beautiful in the gentle dusk sun. She cycled past the bustling, stinky market, through the secret street that led to her colony. In her preoccupation, she almost collided with a skipping Raman. He looked at her sheepishly, as she gripped his arm and ushered him home. Through the womb-like meter and a half, multicolored alley, where she would take 10 minutes to unlock the heavy brass lock. And into her tiny two-bedroom home. Her mother bustled in to make chapatis with her, in the kitchen which was unable to accommodate their combined circumference. She began to tell her mother about her day at work.

And the news about her home. Home?

Kirthana Sudhakar is a Masters in Urban Planning Candidate at the Columbia University Graduate School of Architecture, Planning and Preservation.

Published in 2019 | Spring Edition and Everyday