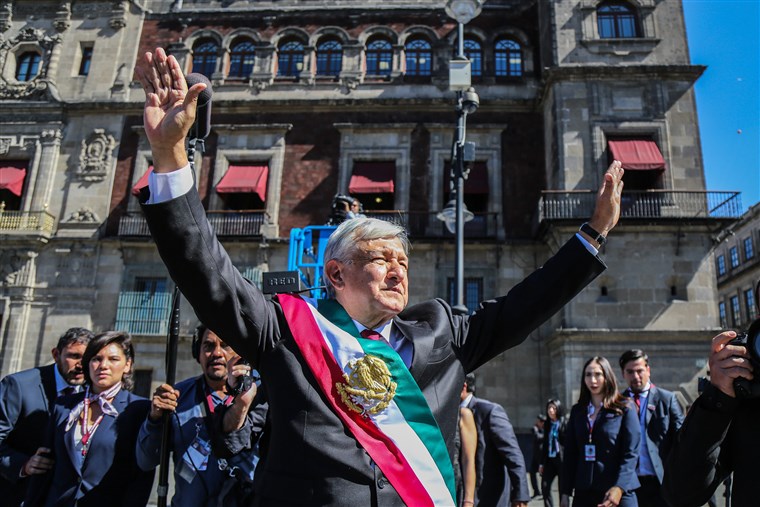 Mexico has a new President, Andrés Manuel López Obrador. He won with 53% of the vote and currently enjoys over 70% approval rating. There is a generalized feeling that democracy, accountability and development will be improved during his term, and part of that hope comes from proposed actions like the physical decentralization of the “Federal” Government. This paper will analyze this proposal and its potential impacts on power structures and development in Mexico.

The proposed decentralization is not a new idea. In 1985, Mexico City experienced the deadliest earthquake in its history, which resulted in around 10,000 people dead, over 400 collapsed buildings and over 12,000 buildings with damages. As a result, President Miguel de la Madrid decided it was time to decentralize the government (a plan he had talked about since the beginning of his term in 1982), breaking with a colonial design of political and economic control from the center.

After two years, two government institutions (the National Institute for Statistics and Geography [INEGI] and Federal Roads and Bridges [Capufe]) were successfully reallocated outside Mexico City. However, the government realized that the decentralization project was too expensive and would take too long to complete, and it was canceled in 1987. Even though this project ended, President de la Madrid still managed to pass legislation to increase municipalities’ autonomy and decentralize some political power.

For the past 30-plus years, a series of reforms have slowly given more power to local governments; they can make some of their own decisions on education and health, receive more public funds and they are able to allocate their own budget. However, today states are not able to organize their own elections and have limited capacity to collect taxes. On top of that, almost all the Federal Government offices are still located in Mexico City, which means that most government officials live and make decisions from the City. Therefore, decisions that affect 120 million people are made by people who live in one single context, with a limited perspective.

I believe that decentralizing the government is a necessary project to address inequalities across Mexico. On the one hand, cities like Mexico City, Guadalajara, Monterrey, Querétaro, Morelia, and Aguascalientes are wealthy and competing with other cities on a global scale. In these places you find Formula 1 competitions, International Film Festivals, corporate headquarters for international enterprises, and regional sporting events, to mention a few examples. On the other hand, states like Chiapas, Oaxaca, Guerrero, Campeche, and Tabasco are marginalized and their citizens suffer from poverty, hunger, educational lag, and limited access to basic services.

When national decisions are made from the center, by people that come from the wealthier parts of the country and whose everyday lives happen in a “modern” and globalized place like Mexico City, it is easy for the central government to lose its perspective. One example of this was Mexico signing of the North America Free Trade Agreement in 1994.  The government of President Carlos Salinas de Gortari had a neoliberal ideology and had great plans for Mexico to become a “modern”, competitive and wealthy country; NAFTA was one of his greatest accomplishments. However, the treaty also caused the Zapatista uprising in the marginalized South, a region usually ignored by the government and that would be negatively impacted by NAFTA. President Salinas was governing for one reality of the country while ignoring the other, and that tension ended up exploding in January 1994.

This disconnection makes more sense when one realizes that not one President since the Mexican Revolution in 1910 was born in the South; the other Presidents discussed here, de la Madrid and Salinas, are from Colima (in the center-west) and Mexico City. In contrast, President López Obrador comes from a marginalized state in the South, Tabasco, and not even from its capital Villahermosa, but from the town of Tepetitán (with a population of 1,500) in the municipality of Macuspana.

The explicit intention of President López Obrador to physically decentralizing his government is to promote economic development in other states, including a strong focus on the southern states, instead of “hoarding” it in the center. The logic is that many businesses concentrate in the major cities because they want to be close to political power; if you distribute government institutions, economic institutions will follow. However, while it is not explicit, decentralization can also benefit the country by bringing the government closer to different parts of the country; decentralization can thus bring a new and wider perspective to the Federal Government, it can turn into an ideological decentralization as well.

Two other government actions that have to do with states have been announced and seem to threaten the potential decentralization of power I have discussed so far. The President has announced the introduction of a “superdelegate” figure in each state, who would act as direct representatives of the Federal Government on all matters except for security. Since 1976, Federal Delegates are present in all states as representatives of Federal Secretaries and Institutes (meaning there were several delegates in each state). In order to make the model of representation more efficient, the over 2,300 delegations currently in existence will be condensed in just 32 (one per each state) that will depend directly on the Office of the Presidency.

The superdelegates will be responsible for coordinating all Federal Government actions in their own state, including all federal welfare programs. The fear many analysts have is that this new extension of the President’s power will be used for electoral purposes. Instead of local institutions overseeing the Federal Programs (like social security, cash transfers, and scholarships), the superdelegate will have this responsibility, and they can decide how and where to allocate resources. It is especially troubling to imagine this arrangement playing out in states whose governors belong to the opposition; incidentally, superdelegates are all members of the President’s party (and not necessarily native to the states they are assigned to).

The second action is less of a sure thing because, unlike the superdelegates, this needs Congressional approval. The President is proposing the creation of a National Guard that would be in charge of public security. The Guard would have 50 thousand members and would be integrated by elements of the Army, the Marine, the soon to be extinct Federal Police and new recruits. This new institution would be coordinated by both the Secretary of Defense (for operation, training and budget allocation) and the Interior Security Secretary (for all other administrative issues). This proposal is a response to the drug war and rising violence in Mexico, which is widely viewed as being exaserbated by  the weakness of local authorities to deal with the problem.

For many, including collective #SeguridadSinGuerra [Security without war] (integrated by academic experts on security, journalists, activists, victims of the war and regular citizens), this proposal threatens to militarize the country (even more than it already is) and hinders the ability of the states and municipalities to develop their own capacities. The President says this is a necessary measure because states don’t have the elements to fight organized crime, but his plan is not an attempt to  help them develop local police and intelligence resources, but rather  take over the responsibility for them.

Considering this context, it is possible that the physical decentralization is a political stunt, a physical change people can focus on while other things are happening out of the spotlight. The President can say he is giving power and development to the states and municipalities by moving Federal Agencies to cities all around the country, while in fact he seems to be consolidating his power in a more centralized form of government.

During the following years, the built environment in Mexico will undertake substantial change, and it is important to debate the role planners can have in this process. David Harvey, in his book “The Urbanization of Capital”, argues that “the role of the planner (…) ultimately derives its justification and legitimacy from intervening to restore (the) balance which perpetuates the existing social order” and that “in the reverse direction, the planner’s knowledge is used ideologically, as both legitimation and justification for certain forms of action”.

Harvey’s critique is still very much applicable to the country, but instead of helping reproduce capitalism (Harvey’s main critique), planning in Mexico has helped reproduce the strong and centralized political power we have discussed here. However, this proposal is a new opportunity for planners to work toward  healthier cities and a stronger democratic life. While the decision of which cities would become the new hosts for Federal agencies was decided behind closed doors, planners can still have a significant impact in deciding how the host cities will grow, provide services, and allocate space. Planners will define the patterns of urbanization by  either replicate power structures, or subvert them.

Changing the built environment is an amazing tool to enact more profound changes, if I didn’t believe that, I would not be studying to become a planner; but I also believe that is all it is, a tool. A planner has a set of skills, which range from simple drawings, to understanding the complexity of mapping, from learning codes and regulations, to understanding the real impacts that our plans can have. Those skills and abilities can be used either to promote change or to hinder it, to distribute power or to concentrate it.

Considering all the changes happening under this new government that deal with the relationship and distribution of power between the federal and the local governments, I believe that the physical decentralization is more likely to be about extending the power of the President than it is about redistributing executive power to the states and municipalities. Decisions will still be made in the center, mainly those that have to do with security (all agencies involved in this matter will remain in the capital), and control mechanisms over the states have been simplified by introducing superdelegates.

Despite my apparent pessimism, I still think physical decentralization is a good idea. It offers a path to improve democracy in Mexico and to bring new opportunities to long-forgotten regions. Now that the door is open, planners can choose to use their skills not just to “go with the motions” of the context and address problems as they come, but to instead to reshape the way we build cities and really bring democratic planning processes to the table.

Communities throughout the country can get the unique and long-awaited opportunity to shape the way in which their space is growing, to decide how they want to move, how they want to live, what cities they want their children to live in. Even if the President plans (and succeeds) to centralize power under the guise of decentralization, planners can still contribute to promoting democracy on the ground by advocating policies like Participatory Budgets and Public Consultation for planning decisions.

If the worst case happens and states end up losing a lot of their power, a new movement to counter this new reality can come from empowered, civically engaged citizens that live democratically in their communities on a daily basis, even if policies at the Federal Level are moving in a different direction. This can only happen if planners working on the ground make a conscious decision to be committed to democratic principles, to utilize methods of planning that nurture those principles and to hold such pursuits as the guiding ideas in every planning project. If the President’s intention is really to further democracy, this task will be met with helping hands.

Jimena is a candidate for the Master in Urban Planning at the Harvard Graduate School of Design.